There’s some good and bad news from Facebook this week.

The removal of the functionality comes as a result of Facebook’s API changes, which have been implemented in the wake of the Cambridge Analytica scandal. After their recent app review, Facebook opted to remove re-sharing functionality for many apps, including Twitter, in order to limit the activities of auto-posting spammers. The changes went into effect on August 1st. 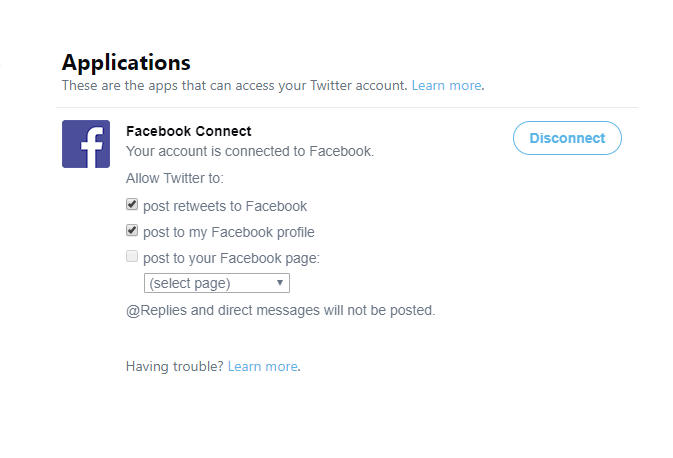 While it may still appear, it won’t actually work anymore – and if you go to fix it by disconnecting, then re-connecting, this message will just repeatedly re-load on screen, without allowing you to re-establish it.

Twitter’s also now added a note in their Help Center to clarify. 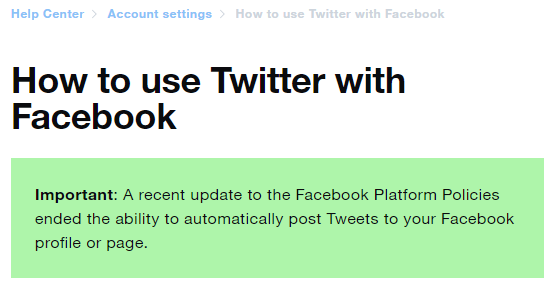 So that, theoretically, is the bad news. The good news is that you should never do this anyway.

While you may save some time by streaming your tweets through to Facebook, enabling you to double post every time you hit ‘Tweet’, tweets on Facebook generally look out of place. I mean, you can get around this by maintaining awareness of what works on each platform and limiting your tweets. But in doing so, you are, in effect, limiting them. You’re not utilising the full capability of each platform, thereby failing your audience on one or the other, at least in some capacity.

For example, hashtags aren’t as effective on Facebook, tweet character limits cut off Facebook and Instagram captions, the links from auto-posts end up looking clunky and out of place. As much as it takes more time to compose messages on each individual platform, it really is the only way to ensure that you’re making the most of your opportunities, and providing the best experience to your different app audiences.

So, now you’ll have no choice – you can still cross-post to Twitter from Facebook, but not the other way around, eliminating one of the more traditionally flawed social practices.

It may be a little more work, but focusing on each individual platform will likely produce much better results in the long run. Twitter didn’t plan it this way, but the removal of tweet cross-posting is likely a blessing in disguise.

Credit: the genius that is Andrew Hutchinson